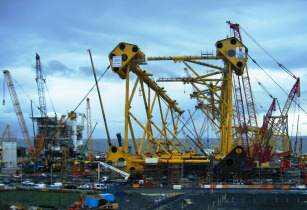 Oil giant Saudi Aramco has signed an MoU to establish a shipbuilding and repair complex in the Kingdom, which is part of Saudi Arabia’s efforts to diversify its economy beyond oil

Reuters reported that pressured by low oil prices, Riyadh is laying plans to develop non-oil industries, using state spending to jump-start the process. The shipbuilding complex is one of the first big projects to be announced under this policy.

The MoU was signed by National Shipping Company of Saudi Arabia (Bahri), a subsidiary of London-listed Lamprell and South Korea’s Hyundai Heavy Industries.

The companies will study a proposal over the next few months to build a maritime complex offering engineering, manufacturing and repair services for offshore rigs, commercial vessels and offshore service vessels, Saudi Aramco stated.

However, the company did not give a value for the project but chairman Khalid al-Falih said that it was expected to be located on Saudi Arabia’s east coast and could eventually create 500,000 jobs.

The complex will initially support the company’s operations but will ultimately move on to other markets such as manufacturing container vessels.