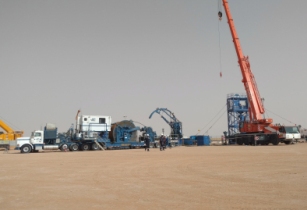 Saudi Aramco and Baker Hughes announced earlier in the month that the first installation of the TransCoil rigless-deployed electrical submersible pumping (ESP) system, which is designed to help operators bring wells on production faster and lower the costs associated with installing and replacing ESPs. Because they can eliminate the need for a rig in fields where rig availability is a concern or where high intervention costs can limit artificial lift options, operators can minimize deferred production and lower their overall lifting costs to extend the economic life of their assets.

The TransCoil system, developed in participation with Saudi Aramco, features an inverted ESP system with the motor connected directly to a new, proprietary power cable configuration, eliminating the traditional ESP power cable-to-motor connection, which improves overall system reliability. Unlike wireline-deployed ESPs, the fully retrievable TransCoil system does not have an in-well “wet connection,” which requires a rig to pull and replace if the wet connection fails.

The innovative power cable design enhances the reliability of the deployment string compared to coiled tubing-deployed ESPs that simply pull the power cable through the coiled tubing. Extensive fatigue testing and thermal growth analysis were conducted at the Baker Hughes Coiled Tubing Research and Engineering Center to enhance materials selection and system design. The TransCoil system cable design also extends the operating range to 12,000 ft compared to traditional coiled tubing-deployed ESP systems, which are limited to approximately 7,000 ft because, at greater depths, the weight of the power cable will cause it to collapse inside the coiled tubing, creating an electrical failure.

The TransCoil system can be installed in 4½-in. to 9-in. casing in wells with flow rates up to 18,000 BPD. In mature offshore fields, where high intervention costs can limit the application of ESPs, the system can be deployed through the existing 4½-in. tubing, saving the time and money required to pull the existing completion. Another advantage of the TransCoil technology compared to wireline-deployed ESPs is that it can be installed through a deviation in the wellbore. This capability allows operators to land the ESP closer to the producing zone for greater reservoir pressure draw down and reserve recovery.

A TransCoil system was recently installed and commissioned in Saudi Aramco’s Khurais field.