Production logging with jet pump to lift the well, MPLT on opportunity basis

Production logging survey for well-reservoir performance evaluation in most of the cases is standalone activity in the production wells equipped with Y-tool, dual wellhead completion or in naturally flowing wells

However, most of the wells don’t have any of that equipment designed for PLT and produced by standard beam lift, PSP or ESP which makes Production logging impossible. Those wells develop water cut over time loosing production year by year. Therefore, timely understanding of well-reservoir performance is essential in order to arrest water cut development especially in multi-layer wells through water shut-off, perform necessary workover to stimulate underperforming zones. However, first production logging has to be done for reservoir performance evaluation.

There is a solution for such wells which don’t have any way to be surveyed by Production Logging once its artificial lift is pulled from the well. 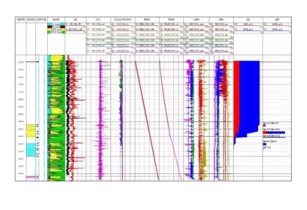 North Side developed FlowJet pump system which can be used for MPLT once artificial lift is pulled from the well for replacement. FlowJet pump has got unique insets designed to do production logging through it in well flowing mode. The same workover rig can run FlowJet pump on 3.5 or 4.5 tubing and MPLT can be done using standard slickline unit and MPLT tools. Data Interpretation with relevant recommendations can be available on rig floor in 6 hours after logging complete.

The second step is to perform necessary operations with reservoir to improve its performance based on MPLT interpretation. Reservoir oriented workover is to be done by workover rig itself.

The third step it to check the success of workover operations. For this North Side runs FlowJet pump with 4 parameters MEFM tool which hanged below FlowJet pump. Well to be lifted up again by FlowJet pump and MEFM tool measures gross production, water cut, pressure and temperature to make sure that reservoir performs better.

As a result of the final test by FlowJet pump and MEFM tool there is plot produced by North Side engineers on rig floor showing performance of the wells after workover.

Once it is clear that workover is successful, well producing oil, workover rig will run artificial lift for permanent production.

At such opportunity as a pump replacement, using FlowJet pump with MPLT and MEFM tools technique, well-reservoir performance can be evaluated and improved with less cost and 100% assurance of workover operations success.