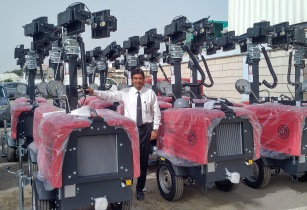 As Ejazul Hassan, Equipment Sales Manager for GTE, explains “The CPLT V15 LED is highly efficient, making it ideal for projects requiring a large number of light towers. With this model, users can save on both fuel and maintenance costs. For instance, the LED’s lifespan is 30,000 hours, compared to 6,000 hours provided by a metal halide bulb. This means the CPLT V15 LED’s bulbs don’t need to be replaced for approximately 3 years.”

To highlight the benefits of opting for LED, GTE carried out a live demonstration to compare a metal halide light tower and a CLPT V15 LED at its client’s premises. During this exercise, the contractor’s technical team observed the features of both units, from the quality of illumination and compactness of the machines to noise levels, among others.

“The LED offered 150 hours of continuous run time compared to 57 hours provided by the metal halide model. Therefore, the tank of the CPLT V15 LED will not need refuelling for approximately 20 days. This helps to increases productivity as it reduces downtimes,” says Ejazul Hassan. Regarding illumination, the CPLT V15 LED was shown to be capable of covering a 5,000 sq. m area while the metal halide model could only illuminate an area of up to 4,000 sq. m.

After the demonstration, the contractor’s technical team unanimously decided to retain the LED demo unit and raise a purchase order for 24 more light towers; with the first machines being delivered two months ago.

This order represents the first sale of CPLT V15 LED light towers in the Middle East. Amjad Fallatah, Regional Product Manager for Chicago Pneumatic Construction Equipment in the Middle East says: “We would like to congratulate GTE for closing this deal and recognise their wonderful performance during recent months, in which they have set trends and increased the awareness of our portfolio in Kuwait. We are pleased to have them as partner because they are a strong company in the region and closely share our values and objectives.”

Because of the harsh conditions that the light towers are likely to operate within, the CPLT V15 LED features a Polyethylene canopy that protects vital internal components. Not only is the canopy durable, it also features wide wing doors to allow easy maintenance access to the machine, including service components and drains. The light tower also has an environmentally friendly frame that prevents any excess fluid escaping.

Even in the most demanding conditions, the CPLT V15 LED enhances safety on site via its four heavy-duty stabilisers and level indicator. The light tower’s compact and lightweight design makes it easy to move to or around the work site. It can also be transported with the mast in the vertical position, allowing safer transportation and installation.