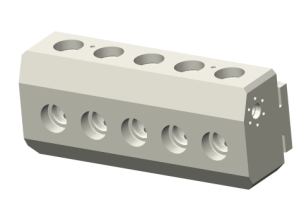 By eliminating one of the most common causes of fluid end failure, fatigue cracking at the intersection of the bores, new Cat® Cube Bore well stimulation technology significantly reduces the downtime and costs associated with fluid end replacement.

“Fluid ends are costly consumable items, and when they reach the end of their lives, it can be a labour- and time-consuming process to replace them,” said Shaun Boller, pressure pumping specialist at Caterpillar Oil & Gas.

“As the manufacturer, anything we can do to extend the life of the block keeps our customers pumping and earning money,” Boller added.

According to Caterpillar, traditional products focus stress on the corners of the intersecting bore, resulting in highly concentrated stresses in localised areas. Stress combined with corrosion pitting causes cracks to initiate and spread, compromising the pump’s overall function and leading to block failure.

“We explored a number of ways to solve the problems of stress and cracking,” Boller said. “Ultimately, it came down to one thing, to prevent cracking, you have to eliminate high-stress areas, and that requires modifying the geometry of the fluid end.”

The Cat Cube Bore design disperses stress from the high-pressure bore into the surrounding material. It removes material in critical areas near the bore intersections and smoothes large corners, which, in turn, smoothes the stress profiles and allows energy to be absorbed by the surrounding block material.

According to validation testing performed in the field, the design completely eliminates the failure mode for intersecting bore corrosion fatigue cracking. Field trials are underway or complete at nine different customer sites across the United States.