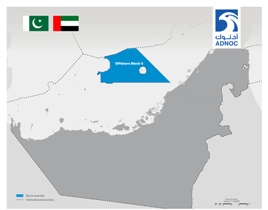 Dr. Sultan Ahmed Al Jaber, UAE minister of industry and advanced technology and managing director and group CEO of ADNOC, said, “This historic exploration concession award marks a new chapter of energy cooperation in the 50-year old UAE-Pakistan relationship. It represents an important platform upon which we can drive win-win opportunities to support Pakistan’s energy security and further strengthen the strategic and economic ties between our two countries. We are delighted to partner with Pakistan Petroleum Limited and the other members of the consortium on Offshore Block 5.

“The consortium was selected as part of Abu Dhabi’s block bid round where we have once again reinforced our approach to strategic partnerships that contribute the right combination of market access, capital, best-in-class expertise or advanced technology. We are very optimistic about the potential to unlock significant value with all our partners in this second competitive block bid round as we continue to accelerate the exploration and development of Abu Dhabi’s untapped resources.”

Moin Raza Khan, managing director and CEO of PPL, the leader of the consortium, said, “We are particularly excited that this consortium comprises the ‘big four’ national exploration and production companies that are fully geared to support ADNOC and the Emirate of Abu Dhabi in reinforcing its leading position in the global energy sector.”

Under the terms of the agreement, the consortium will hold a 100% stake in the exploration phase, investing up to US$304.7mn (AED1.12bn) towards exploration and appraisal drilling, including a participation fee, to explore for and appraise oil and gas opportunities in the 6,223 sq km block located 100 km north east of Abu Dhabi city.

In addition to drilling exploration and appraisal wells, the exploration phase will see the consortium leverage and contribute financially and technically to ADNOC’s mega seismic survey, which is acquiring 3D seismic data within the block area. The data already acquired over a large part of the block combined with its proximity to existing oil and gas fields, suggests the concession area has promising potential.

ADNOC launched Abu Dhabi’s second competitive block bid round in 2019, offering a set of major onshore and offshore blocks. The award of Offshore Block 5 to the Pakistani consortium concludes this second block bid round, which has seen very competitive proposals submitted for the geographical areas offered.