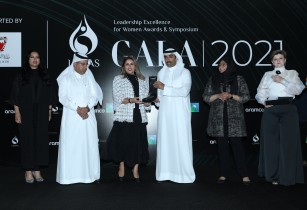 Leadership Excellence for Women Awards and Symposium (LEWAS), held at Gulf Hotel in the kingdom of Bahrain, has announced the winners of the LEWAS Awards 2021 edition

The gala night, exclusively sponsored by Saudi Aramco, celebrated Middle East’s energy industry pioneers, promoting the accomplishments made by energy professionals and companies in the region.

The night was headlined by ADNOC Group taking home the Corporate Excellence Award; the Woman of Achievement Award was jointly won by Basma El Zein, Director General, Governance and Sustainability Center, University of Business and Technology and Mubadala Petroleum’s Salma Al Hajeri, VP, Non-Operated Assets (MENA & Russia) among many others.

The winners were carefully selected for exuding excellence on and off-the-field for their outreach; ensuring they furthered the diversity and inclusion agenda through their commitment.

Now in its seventh edition, the LEWAS Awards has progressively seen entries from diverse roles within the energy spectrum. For the first time the awards were opened to individuals and organizations from non-technical backgrounds including communications, consulting, finance and more.

HE Shaikh Mohammed bin Khalifa Al Khalifa, minister of oil, kingdom of Bahrain, and patron of LEWAS, as well as other notable VIPs and Middle East profiles shared their excitement on being welcomed back in-person.

Reem Al Ghanim, chair of LEWAS, said, “At LEWAS, it’s always been about networking and shining the spotlight on unique, trailblazing women, male allies and organisations who epitomise what a gender equal industry should look like. It’s been an incredible night thanks to the networking, the buzz and having a room full of champions, supporters and press who were here to celebrate our winners.”