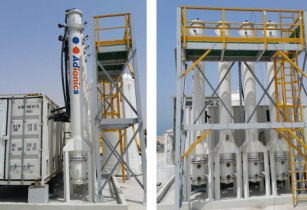 Adionics, who took part in the ADIPEC Exhibition and conference 2016 in Abu Dhabi, is pleased to announce the launch of O&G SELECTEX, a selective extraction solution for O&G produced water desalination/injection water.

When SMARTEX which was launched at WETEX 15 in Dubai, is able to smartly extract families of ions in line with Mendeleev classification columns, such as alkali metals (cations+) or alkaline earth metals (cations++), SELECTEX takes the technology one step further. SELECTEX is able to pick out from high saline waters one or two or three cations like for instance sodium, potassium, calcium, strontium or barium as neutral salts, to meet the process specification, while the other ones are left in the treated water. This new approach was expected to become a major breakthrough in many industries such as pharmaceutical, chemicals, oil & gas as well as mining.

SELECTEX stands for selective extraction and is a declination of AquaOmnes® technology. Adionics revealed this technology on the occasion of the last IFAT fair (Munich, May 2014) and further industrial variants for brines and industrial water at IWS15 and WETEX15. AquaOmnes removes salts from saline water by liquid-liquid extraction whatever the salinity without being limited by any scaling barrier.

Latest campaigns of tests on 3 different types of real produced water, with TDS ranging from 30 up to 180 grams per litre, have confirmed SELECTEX technology fully operates in challenging process water conditions such as presence of free and dissolved hydrocarbons and high suspended solids. Some of these campaigns have been performed by a major player in the O&G industry and will be the subject of a Paper published during the ADIPEC exhibition.

Thierry Darde, the EVP Sales & Marketing of Adionics said: “Thanks to oil & gas SELECTEX, ADIONICS solution is able to treat high saline produced water and remove some salts, for instance calcium and/or strontium and/or barium, or even sulphate when other ones, for instance Sodium and/or Chloride are left in the treated water. This new approach in the world of enhancement oil recovery is expected to become a major breakthrough for this industry. The first pilots are to be implemented in the field in 2017.”