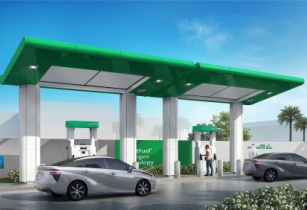 Saudi Aramco and Air Products, a chemical industry company, have announced the signing of an agreement to jointly build the first hydrogen fuel cell vehicle fuelling station in Saudi Arabia

The collaboration between the two companies will combine Air Products’ technological know-how and experience in the field of hydrogen with Saudi Aramco’s industrial experience, facilities and R&D capabilities

Saudi Aramco and Air Products will establish a pilot fleet of fuel cell vehicles for which high-purity compressed hydrogen will be dispensed at the new fuelling station.

Air Products’ proprietary SmartFuel hydrogen fuelling technology will be incorporated into the new station to supply the vehicles with compressed hydrogen.

The collected data during this pilot phase of the project will provide valuable information for the assessment of future applications of this emerging transport technology in the local environment. The hydrogen refuelling station, the first in the kingdom, is expected to be operational in the second quarter of 2019.

“The use of hydrogen derived from oil or gas to power fuel cell electric vehicles represents an exciting opportunity to expand the use of oil in clean transport,” he added.

Dr Samir Serhan, executive vice-president at Air Products, commented, “We are honoured to work on another venture with Saudi Aramco to establish and develop a sustainable hydrocarbon-based hydrogen supply system for pilot demonstration of a fuel cell vehicle fleet in Saudi Arabia.”

He continued, “It further illustrates our commitment to the Kingdom’s 2030 vision.”

The hydrogen refuelling station will be located at Air Products’ new Technology Centre in the Dhahran Techno Valley Science Park.

Toyota Motor Corporation will supply Toyota Mirai Fuel Cell Vehicles for testing in this pilot project. Toyota has been investing in hydrogen for over 20 years and in 2014 introduced the Mirai, its first mass-produced hydrogen fuel cell vehicle.