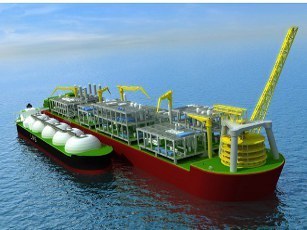 Moored far out to sea, some 200 kilometres from the nearest land in Australia, the FLNG facility will produce gas from offshore fields, and liquefy it onboard by cooling.

The decision means that Shell is now ready to start detailed design and construction of what will be the world's largest floating offshore facility, in a ship yard in South Korea.

From bow to stern, Shell's FLNG facility will be 488 metres long, and will be the largest floating offshore facility in the world – longer than four soccer fields laid end to end. When fully equipped and with its storage tanks full, it will weigh around 600,000 tonnes – roughly six times as much as the largest aircraft carrier.

Some 260,000 tonnes of that weight will consist of steel – around five times more than was used to build the Sydney Harbour Bridge.

"Our innovative FLNG technology will allow us to develop offshore gas fields that otherwise would be too costly to develop," said Malcolm Brinded, Shell's Executive Director, Upstream International.

"Our decision to go ahead with this project is a true breakthrough for the LNG industry, giving it a significant boost to help meet the world's growing demand for the cleanest-burning fossil fuel."

Brinded continued "FLNG technology is an exciting innovation, complementary to onshore LNG, which can help accelerate the development of gas resources".

The facility has been designed to withstand the severest cyclones - those of Category 5. Ocean-going LNG carriers will offload liquefied gas, chilled to minus 162 Celsius and shrunk in volume by 600 times, and other products, directly from the facility out at sea for delivery to markets worldwide. Until now, the liquefaction of offshore gas has always involved piping the gas to a land-based plant.

Shell has progressed the Prelude FLNG project at a rapid pace, with first production of LNG expected some ten years after the gas was discovered.

Some 110,000 barrels of oil equivalent per day of expected production from Prelude should underpin at least 5.3 million tonnes per annum (mtpa) of liquids, comprising 3.6 mtpa of LNG, 1.3 mtpa of condensate and 0.4 mtpa of liquefied petroleum gas.

The FLNG facility will stay permanently moored at the Prelude gas field for 25 years, and in later development phases should produce from other fields in the area where Shell has an interest.

Ann Pickard, Country Chair of Shell in Australia said "this will be a game changer for the energy industry. We will be deploying this revolutionary technology first in Australian waters, where it will add another dimension to Australia's already vibrant gas industry."

Brinded added "beyond this, our ambition is to develop more FLNG projects globally. Our design can accommodate a range of gas fields, and our strategic partnership with Technip and Samsung should enable us to apply it progressively faster for future projects. We see opportunities around the world to work on other FLNG projects with governments, energy companies and customers."

Shell's decision to make FLNG a reality culminates more than a decade of research and development. It builds on the company's extensive know-how in offshore production, gas liquefaction, LNG shipping, and delivering major projects that integrate the gas value chain—from wellhead to burner.

The Prelude FLNG project will be the first Australian upstream project in which Shell is the operator. Australia is one of Shell's key growth provinces, and Shell's upstream investment in Australia should reach some $30 billion over the next five years, including the Prelude and Gorgon projects, and on-going exploration and feasibility studies in the country.

Prelude FLNG is part of Shell's industry-leading portfolio of medium term growth options, where the company has around 30 new upstream projects under study world-wide, to support long term profitable growth.