Qatar to supply Malaysia with LNG 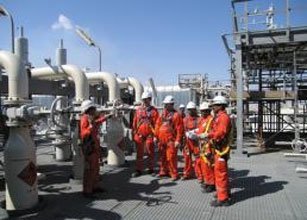 Qatargas has signed a heads of agreement with Petronas to supply the Malaysian company with 1.5 million mt/year of LNG under a long-term contract.

The agreement is for 20 years, with the first LNG cargo to be delivered in 2013.

"This is equivalent to about 5 per cent of Malaysia's current annual average domestic natural gas demand, which is growing at a rate of around 6 per cent per annum," Qatargas said.

Qatargas will supply the agreed volumes from the Qatargas 2 project, a joint venture between Qatar Petroleum and ExxonMobil, to Malaysia's first LNG receiving terminal, currently under construction in Malacca.

Petronas in December 2010 signed a heads of agreement with its subsidiary, Petronas Gas, to develop an LNG import terminal near Sungai Udang Port in Malacca.

The project will comprise two floating storage units to receive and store LNG, an island jetty and regasification units, as well as subsea and onshore pipelines to transport the regasified LNG to Malaysia's Peninsular Gas Utilization pipeline network, which serves the Peninsular Malaysia gas market.

The regasification facility will have maximum throughput capacity of 3.8 million mt/year, and is expected to be completed by July 31, 2012, Petronas Gas has said.

Petronas has a 27.5 per cent stake in the project and has a 20-year contract to buy 3.5 million mt/year of LNG from the project.