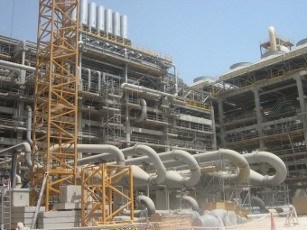 Qatar Petroleum and Shell announced the first flow of dedicated offshore gas into the Pearl GTL plant located in Ras Laffan Industrial City in the State of Qatar.

Shell, which is the operator of the Pearl GTL plant developed under a Production and Sharing Agreement with QP, opened natural gas wells offshore allowing the first sour gas to flow through a subsea pipeline into the giant GTL plant onshore. Sections of the Pearl GTL plant will be started up progressively over the coming months.

Peter Voser, Chief Executive Officer of Shell said: "This is an important milestone in the Pearl GTL project, and we are on a clear pathway towards the start up of gas to liquids production."

The Pearl GTL project was launched in July 2006 and the first stone was laid in February 2007. Pearl GTL is the largest energy project ever launched in the State of Qatar, in terms of total investments. It consists of two offshore platforms 60 kilometres off the Qatar coast, connected by pipeline to the largest Gas to Liquids plant ever built, located in Ras Laffan Industrial City.

His Excellency Dr. Mohammed bin Saleh Al-Sada, Qatar's Minister of Energy and Industry said: "This project will play an important role in further enhancing our diversification of the North Field gas utilisation and will support the optimisation of Qatar's competitive position in the world markets by supplying ultra clean GTL products. I would like to congratulate the Qatar Petroleum and Shell teams on first on-shore gas. The scale, technology and safety record on Pearl GTL have broken all records."

Once fully operational, Pearl will produce 1.6 billion cubic feet of gas per day from the North Field, which will be processed to generate 120,000 bpd of condensate and natural gas liquids and 140,000 bpd of gas to liquids (GTL) products.