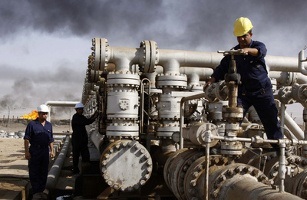 Iraq's proposed gas deal with Shell to capture and exploit associated gas from its giant southern oil fields is expected to produce two billion cubic and will cost US$17.2 billion.

According to a new leaked document seen by various news orgnaisations, the joint project is expected to produce two billion cubic feet of gas a day. The summary was submitted for approval to the country's parliament by Iraq's oil ministry .

The deal, signed in July with Shell and Japan's Mitsubishi Corp., creates a joint venture called Basra Gas Co. The two sides disclosed few details about the agreement at the time.

The investment required for the 25-year venture, in which Iraq has 51 per cent, Shell 44 per cent and Mitsubishi 5 per cent, is in fact US$17.2 billion instead of the previously announced US$12 billion, the document said.

It said some US$12.8 billion would be spent on rehabilitation of existing infrastructure and building new ones, while an additional $4.4 billion is required for an liquefied natural gas facility to be built by Shell and Mitsubishi.

Baghdad needs to contribute US$5.236 billion in the venture, some US$1.524 billion of which is existing infrastructure. While Shell and Mitsubishi need to contribute nearly $7 billion, and the remaining money will be financed through the venture's returns, according to the summary.

Shell and Mitsubishi are also offering an optional loan of US$1 billion to the Iraqi side in the venture, the document added.

Iraq estimates it should make around US$31.1 billion over the 25 years of the project from taxes, fees and the raw gas sales to the joint venture, the document said.