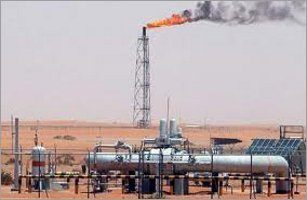 Aramco had previously said it expected work on Karan to be completed in 2013 with the capacity to process 1.8 billion cubic feet per day (cfd) of gas.

'When fully operational in 2012, the project will produce 1.8 billion scfd (standard cfd) of raw gas,' Aramco said, adding initial production of 400 million cfd of gas 'planned during peak summer demand will be starting in 2011', in line with previous announcements while output of unprocessed gas was expected to be 1.5 billion cfd by 2012.

Aramco said it produced 9.4 billion cfd of gas in 2010, up from 8.6 billion cfd in 2009. Aramco continues to focus on raising gas output to meet rising domestic demand for power and petrochemicals.

It is now building two major gas projects, Wasit and Shaybah natural gas liquids (NGL), which should both be completed in 2014. Domestic demand for gas in the world's largest oil exporter is growing 5-6 per cent annually.

Discovered in April 2006, Karan gas field is the first non-associated gas field located in Saudi territorial waters of the Arabian Gulf, 160-km north of the company's headquarters in Dhahran.

Non-associated gas fields do not have an associated oil column and can thus be produced without waiting to deplete the oil reserves before producing the gas cap associated with an oil field.

The Karan field was discovered when the Karan-6 well drilled into deeper formations, finding gas in the Khuff carbonate reservoirs laid down from 200 to 299mn years ago in the Permian and Triassic periods.

With a Khuff gross thickness up to 1,000 feet, Karan's is the thickest Khuff reservoir section ever encountered in Saudi Arabia. The Khuff formation ranges in depth from 10,500-13,700 feet, and Karan lies in medium-depth waters of 40-60 meters.

The gas production will be staged with five wells already drilled and completed that will be tied-in and commissioned for 400mn scfd in early production planned for four months during 2011 summer peak demand.

Produced gas will be co-mingled at one Tie-In Offshore Platform through five 20-inch subsea flowlines. Then, gas will be transported via one 38-inch subsea pipeline onshore to the Khursaniyah Gas Plant (KGP), where new gas-processing facilities are being constructed.

The project marks a milestone in Saudi Aramco's gas expansion program. Additional Khuff offshore gas fields, similar to Karan, at Arabiyah (1.2 billion scfd) and Hasbah (1.3 billion scfd) were recently discovered and have been approved for development, with drilling to start in June 2011. These fields will provide a vital part of the Kingdom's gas production.