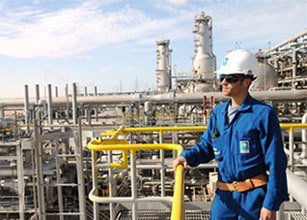 The sources did not say when the field - a key part of the Kingdom’s plan to increase gas production to reduce dependency on oil - would reach its target production of 400-450mn cubic feet per day (cfd) of gas.

Saudi Aramco, which has focused on new gas projects since completing a massive crude expansion plan in 2009, said in its 2010 annual review that Karan should reach a full production capacity of 1.8 billion cfd in April 2013, in time for the peak power demand period of May to September.

South Korea’s Hyundai Engineering & Construction and the UK's Petrofac are working on onshore parts of the project, while US-based McDermott International is building offshore platforms and a subsea pipeline to carry sour gas from Karan for processing at the Khursaniyah plant onshore.

Saudi Arabia is focusing on tapping new sources of gas that are not tied to oil production to help meet seasonal demand for electricity and rising petrochemical feedstock needs. In its widening search for fuel, Saudi Aramco’s plans to probe as yet unexploited areas such as the Red Sea for more oil and gas.

The firm is looking at unconventional tight and shale gas sources, focusing initially on the northwest of the country and around Ghawar, the world’s biggest oilfield, where gas infrastructure is already in place and Aramco hopes to identify specific wells this year.

Aramco is now building two major gas projects, Wasit and Shaybah natural gas liquids, which should both be completed in 2014, and is looking at new offshore prospects including deepwater fields.

Wasit, together with the Khursaniyah and Karan gas plants, should help Saudi Arabia reach its targeted production increase of raw gas - unprocessed natural gas - to 15.5 billion cfd by 2015 from 10.2 billion cfd in 2010.