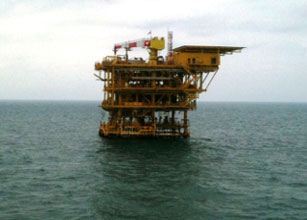 The first flow of gas occurred earlier this month and was transported by subsea pipeline to the onshore Khursaniyah Gas Plant. The first-phase start-up of Karan marks a significant milestone in the company’s gas expansion program.
Discovered in April 2006, Karan is the first non-associated gas field in Saudi territorial waters in the Arabian Gulf, 160km north of the company’s headquarters in Dhahran.
Offshore facilities at Karan consist of five production platform complexes connected to a main tie-in platform, installed with associated electrical power, communication and remote monitoring and control facilities for safe and reliable operations from onshore. Detailed design work began in March 2009.
The field was discovered when the Karan-6 well drilled into Khuff formations, finding gas in carbonate reservoirs laid down from 200 to 300 million years ago in the Permian and Triassic periods. With Khuff’s gross thickness of up to 1,000 feet, Karan’s is the thickest Khuff reservoir section ever encountered in Saudi Arabia. The Khuff formation ranges in depth from 10,500-13,700 feet, and Karan lies in medium-depth waters of 40-60 meters.
A 110km subsea pipeline is transporting Karan gas to onshore processing facilities at the Khursaniyah Gas Plant. The gas is processed through a number of trains that include facilities for gas sweetening, acid-gas enrichment, gas dehydration and supplementary propane refrigeration.
The onshore facilities also include a cogeneration plant, a sulfur recovery unit with storage tank, substations and a transmission pipeline linked to the Kingdom’s Master Gas System (MGS).
Karan, designed to produce 1.8 billion standard cubic feet per day (SCFD) of raw dry gas by 2013 to support the MGS, will be produced from 21 increment wells distributed over five offshore wellhead platforms.
Five wells have been commissioned so far with a production of 120 million SCFD each. Early production, which began in July, is targeted for peak summer demand, with an average production of more than 400 million SCFD. Drilling is under way on 14 more wells on three other platforms, with only four wells left to be drilled. The wells will be completed, tied in and put on stream by June 2012 at 1.5 billion SCFD. The remaining two wells and platform will be ready in April 2013, bringing the field to its full production capacity of 1.8 billion SCFD.