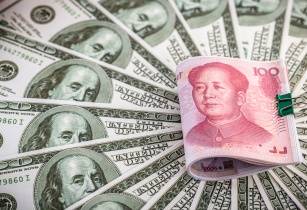 Saudi and Chinese officials are in talks to price some of the Gulf nation's oil sales in yuan rather than dollars, according to reports

Around 80% of global oil sales are conducted in US dollars, but this may not last with talks about a currency shake-up between Gulf nations and their counterparts in China, which buys more than 25% of Saudi Arabia's oil, as reported by the Wall Street Journal.

The two countries have been in talks about yuan-priced oil contracts since 2016, but they have recently gained traction with the growing concerns of Saudi over Washington's promise to the kingdom's security.

A departure from dollars in oil contracts would also aid China’s efforts to convince more countries and international investors to transact in its currency.

The Biden administration is in the final stages of negotiations with Iran aimed at reviving the 2015 nuclear deal. Riyadh opposed the original agreement and backed the Trump administration's decision to withdraw from the accord in 2018, which saw Washington impose devastating sanctions on Tehran.

Additionally, the United Arab Emirates and Saudi Arabia have said they are concerned about the US taking part in talks geared toward reviving the Iran nuclear deal.

Like other countries in the region, the Saudis have perceived the chaotic US withdrawal from Afghanistan and Washington's renewed focus on great-power rivalry with China and Russia as indications of a wider US disengagement from the region.

While many of these issues have been decaying for years, such as when the Trump administration refused to respond to a massive 2019 attack on Saudi oil facilities, ties between the two allies have hit new lows under US President Joe Biden.

Last month, as the administration tried to get Gulf states to increase oil production, the crown prince reportedly rejected the offer of a phone call from the US president, the Journal reported.

The Saudis have also been angered over what they see as the US's lack of support for their war against Iran-aligned Houthis in Yemen.

While many analysts doubt China's appetite to replace the US as security guarantor for the region, economic ties between Beijing and Riyadh have grown. China is the kingdom's largest trade partner, mainly because it purchases 25% of all of Riyadh's oil exports.

Saudi Arabia is also a central pillar of China's Belt and Road infrastructure initiative and ranks in the top three countries globally for Chinese construction projects, according to the China Global Investment Tracker, run by the American Enterprise Institute.

Besides allowing the US to print treasury bills and sell its debt globally, the supremacy of the dollar is a central reason why the US is able to impose powerful sanctions on countries such as Russia and Iran, cutting them out of international financial transactions.

Some analysts expect efforts to replace the dollar to gain more traction, especially amongst the US’s foes, following the unprecedented sanctions Washington and its allies imposed on Russia for its invasion of Ukraine.