Dr Sultan Ahmed Al Jaber, UAE Minister of State and Group CEO of ADNOC, has called on the oil and gas industry to modernise in response to disruptions on multiple levels and a fast-evolving energy landscape 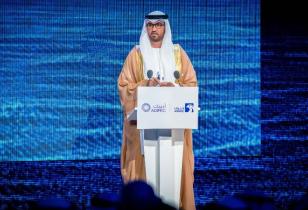 Al Jaber stressed technology is also vital to unlocking one of the central challenges facing the oil and gas industry. (Image source: bcw-global)

He was speaking at the opening of the 35th edition of the Abu Dhabi International Petroleum Exhibition Conference (ADIPEC) which was attended by Mansour bin Zayed Al Nahyan, Deputy Prime Minister and Minister of Presidential Affairs.

Delivering the opening keynote address, at the event, Dr Al Jaber said the oil and gas industry is being disrupted by new technologies, new business models, new forms of energy and a new geopolitical order, with the rise of Asia.

“This era of disruption is just the beginning and will only gather pace over time. Yet, the oil and gas company of today can be a winner tomorrow, if it operates at a lower level of cost and a higher level of performance; if it brings digital into the core of its operations; if it embeds sustainability into its DNA; and if it rethinks how to leverage its partnerships, enable its people and re-centre its customer relationships.

“This is the mission we defined together last year as Oil and Gas 4.0,” Dr Al Jaber said. “By doubling down on this mission-to-modernise, the industry will remain an essential pillar of the future diversified energy mix.

“Our industry is in the business of progress around the world. This week, we have an opportunity to stretch those frontiers even further. Working together through creative partnership, we will drive economic growth responsibly; we will stay at the cutting edge of innovation and we will continue to drive growth and prosperity,” he noted.

“The fact is by 2040, all the energy currently consumed in the US, India, and Japan will be added to global energy demand. And in even the most fast-paced transition scenarios, oil and gas will provide the source for over half of it. These facts are undisputed and simply make a compelling business case to invest in the future of our industry.”

Dr Al Jaber went on to explain how ADNOC, in response to the shift of economic power from West to East, is deepening its partnerships globally and pivoting towards Asia where energy demand is growing fastest. He said ADNOC is on track to expand its oil production capacity to four million barrels per day by the end of 2020 and is finding new reserves of natural gas as it gets closer to achieving gas self-sufficiency for the UAE.

“New discoveries this year include over seven billion barrels in oil reserves, 58 tcf of conventional gas, and significantly over 160 tcf of unconventional gas. And, as a result, the UAE has moved up from 7th to 6th place in the ranking of the largest oil and gas reserves in the world,” he said.

Referring to an earlier announcement by the Intercontinental Exchange (ICE) that it will set up a new futures exchange in Abu Dhabi, to host the world’s first futures contract based on ADNOC’s Murban crude oil, Dr Al Jaber said ADNOC will join major international oil companies (IOCs) as founding partners of the new exchange known as ICE Futures Abu Dhabi, IFAD.

“Leveraging the UAE’s position at the pivot point of growth economies, IFAD will be home to the Murban Futures Contract. Crucially, this contract will replace retroactive pricing with forward pricing. It will allow buyers to hedge their risk in the open market. And it will help capture more value from every barrel we produce.

“This represents a historic milestone that offers our partners and customers significant benefits, and it places Abu Dhabi and the UAE at the geographic centre of global crude trading,” Dr Al Jaber said.

He added ADNOC is also leveraging the UAE’s geography as the company expands its downstream operations and creates a world-scale refining and petrochemicals complex. He invited international partners and the UAE private sector to take advantage of ADNOC’s high-quality feedstock and seize this unique opportunity for growth as the company delivers its downstream expansion strategy.

As the oil and gas industry embraces an age of disruption, digitisation is the next frontier to driving efficiencies, curbing costs and extracting the highest value from every molecule of hydrocarbon produced, Dr Al Jaber said, “At ADNOC, Artificial Intelligence powers our Panorama Digital Command Centre, enabling clearer, real-time, business-critical decision making. Advanced robotics are transforming our surface and subsurface operations. And predictive analytics is significantly minimising our operational downtime and maximising our savings.”

Al Jaber stressed technology is key to unlocking one of the central challenges facing the oil and gas industry: how to deliver more energy with fewer emissions.

“At ADNOC, we are constantly innovating to remain among the least carbon-intensive producers in the world. We are expanding the Middle East’s first commercial-scale carbon capture utilisation and storage facility to capture at least 4.3 million tonnes of CO2 annually by 2030. That equals the amount of CO2 captured annually by five million acres of trees or forest over twice the size of the UAE,” Al Jaber said.

“As we expand our operations, we are pioneering the use of optical drones to monitor fugitive emissions, helping us maintain our best-in-class methane intensity. These innovations will help us keep our longstanding commitment to protecting the environment and honour the legacy of our founding father, Sheikh Zayed, who embedded responsible production into our DNA.”

Al Jaber also said one of ADNOC’s most important tasks is attracting and developing the best talent. “At ADNOC, we are committed to creating an innovative, diverse workplace. A workplace that attracts STEM graduates and encourages creative, progressive thinking. And a workplace where women work alongside men in the field and in leadership roles.” Now, he added, 15 per cent of ADNOC’s senior leadership are women and there are over 700 women working on-site across the company’s upstream and downstream operations.

“A diverse workforce is a key enabler of business success and ensures we are an industry of the future. Ultimately our ability to appeal to the next generation will be determined by how well we communicate why we exist. In other words, our defining purpose as an essential driver of economic development,” he said.