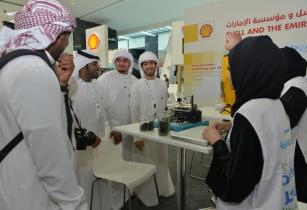 Shell hosted an initiative entitled the Think Science Corner at ADIPEC 2014 in a bid to encourage students to engage in science, technology, engineering, and mathematics (STEM) subjects

In partnership with the Emirates Foundation and with the intention of promoting STEM fields of study, Shell invited students from UAE schools to design and build projects, which were then exhibited at the major oil and gas exhibition.

As an independent organisation set up by the Abu Dhabi government in order to improve the welfare of youth across the UAE, the Emirates Foundation has been in partnership with Shell since 2005.

Examples of previous initiatives they have collaborated on include road safety campaigns, implementation of entrepreneurship programmes and supporting the Takatof volunteering initiative.

Clare Woodcraft, Emirates Foundation CEO, stated, “Shell is one of our most active partners and has supported us in any ways over the years.”