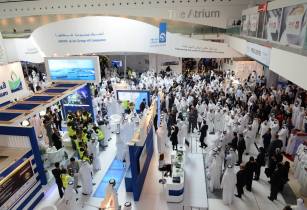 This year’s exhibition will be held under the patronage of Sheikh Khalifa Bin Zayed Al Nahyan, President of the UAE, and supported by Abu Dhabi National Oil Company (ADNOC) and the Abu Dhabi Chamber.

More than 1,800 exhibitors and 60,000 industry professionals from 200 countries will participate in the 30th edition of the event, whose theme is ’Challenges and opportunities for the next 30 years'.

A recent report by BP revealed that 95 per cent of global energy consumption growth is expected to come from emerging economies, with China, Middle East and India contributing most of the revenue.

The UAE, the report stated, is among the world’s top ten oil producers and exporters. More than 95 per cent of the country’s crude oil and gas is produced in Abu Dhabi. According to OPEC, the UAE is the second largest exporter of petroleum.

The show has been successful in the past, with a steady growth in speakers, visitors and exhibitors warranting an expansion of exhibition space from 35,000 sq m to over 40,000 sq m at the Abu Dhabi National Exhibition Centre (ADNEC).