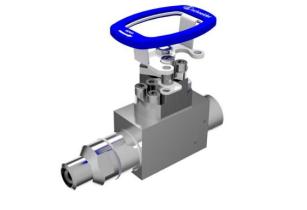 The valve can operate in temperatures ranging from -29ºC to 450ºC, as opposed to conventional valves that can only be operated up to around 250ºC to 300ºC. It has been built to withstand pressure of up to 420 bar, according to Markus Haffner, design and development manager at the company.

Haffner added that the valve has a double sealing system with a two-inch bore, which consists of graphite sealing rings, ensuring zero leakage.

All valve parts, including non-wetted parts, are reportedly made of 316 stainless steel for operations in corrosive environments.

AS-Schneider has been waiting for a patent approval on the metal seated ball valve, the company said.

Rolf Kummer, managing director of AS-Schneider, said, “ADIPEC has given us a great platform to introduce our products to not only potential and existing clients, but has also helped us get introduced to potential partners. We have been coming here for a while now.”

Talking about new bases, Tim Frederik Kohler, sales director for APME and the Americas, added that the company has opened a new sales office in Hong Kong for operations around Asia.

“The place is strategic and convenient even for our Middle East and North Africa markets,” he said.

Apart from the new valve, the company also exhibited monoflanges and VariAS-Blocks.

The monoflanges have been designed to replace conventional multi-valve installations that are used for interface with pressure measuring systems. By combining valves into a single manifold, the number of leak paths are reduced, Schneider said.